Teresa Porzecanski: on her fiction (by Gloria Salbarrey)

Teresa Porzecanski: on her fiction.

Porzecanski´s research and academic pursuits have produced several essays on systems of beliefs and minority identities. In addition she has participated   in collective books, whose edition she has sometimes coordinated  herself. Very prestigious newspapers have published her articles about culture and social issues. However her most interesting facet is developed in her fiction writing which has been widely rewarded.
In her novels Porzecanski repeatedly deals with several subjects, situations and types of characters that appear to be concluded in each book but have no final shape in  the mind of the novelist. Some texts of her previous narrative reemerge in the titles of some of her later works, as examples of intertextuality.
The writer wants to describe ordinary people in their own background: boarding houses, second rate hotels, rooms for rent, dark dirty attics and any place where life seems to deal with violence, misery and death. She chooses to explore these backgrounds and everything that may be hidden behind their mere appearance in the search of a unique piece of greatness. Without any self-awareness, nearly all of her unimportant  characters  are trying to recover or even build their identity.
Porzecanski is not interested in close psychological descriptions  and prefers fragmented characters, full of gaps capable to seize the reader´s imagination. The narrative in the novels, just like fragmented time and space, is interwoven in overlapping and alternating scenes, as it happens in the very "reality" we live in, whose meaning  we are constantly building.
The so called "reality" and fantasy dimension are not distinct and disconnected worlds in her narrative. Nor is the case of the objective and the subjective or the rational and the illogical. There is a vague space in-between where characters move  from one dimension to other, driven by obsessions, madness, fears, dreams or beliefs. These are the type of characters that are always found in Teresa´s narrative: the ordinary middle age woman, the person with unusual habits, the idiots and their special wisdom, the utopist or the Messiahs seeking the future.
The most recurrent characters are the researcher of old documents and oral traditions, or the interpreters of religious signs. Sometimes they belong to a minority system of belief  such as Umbanda,  Kabbala and gypsy culture. These traditions are very open and heterodox, and represent a wide background of the main identity :  Jewish genealogy, and specially female genealogy.  The writer represents her ancestors going back to the first human being and she always includes an old wise character who is in charge of  transmitting the ancient secrets.
Sensual scenes blended with descriptions of meals, ways of  cooking and eating, they all build  up symbols of female desire, pleasure and myths. A detailed attention to women´s body contributes a great deal to the complexity of the author´s conception of femininity.
Fernando Ainsa says "Reversing the well known Cartesian axiom “I think, therefore I exist”- Teresa Porzecanski ´s characters may tell themselves: "I, that is my body, my veins throbbing, the demoniac rhythm of life". The awareness of the complex richness of body fluids and physiological functions tailored to a clockwork mechanism, which only makes more evident the fragile balance, prone to disarticulation and disarray".
Porzecanski doesn´t adhere to feminist theories although she has read the
founding French writers on the subject. She has not explored lesbian feelings and other sexual diversities. The scenes about sisterhood are restricted to some biological sisters or a couple of persons who share dreams, fun and quarrels.

Teresa´s  writings are very near Clarice Lispector´s novels. The Ukrainian-Brazilian writer has explored her Jewish and female identity and built a space in feminine literature that the Uruguayan author  has developed in her own style.

6.Leave and Wander About
Like in most of her work, this novel is inspired by Porzecanski´s memory and is part of the "I scripture" corpus. However, in this text the young Teresa becomes more present because the language, although rich and refined, is easier to read.
Recurrent subjects prove the continuity of her production.  The feeling of the cosmic femininity and the liquid essence open this youth memory of the summer holidays. The account of the first menstruation,  which did not use to be well received by readers, now meets a new readership that is not  embarrassed by such details.
Besides the arrival of household appliances and other shows of material progress, the beauty pageant at La Tumbera - the imaginary typical town of Uruguayan coast- is the great event for the girls  because it enlightens Pelusita, the narrator, about the  opposition between her inner feelings and stereotyped definition of pretty women.
On holidays  teenagers run other adventures, biking and walking on the sandy beach,  meeting strange people and travelling with their imagination beyond the  knowledge of books. Don Silvestre tells them folk stories of their country and Bensusan explains to them the cosmic ideas of the Kabala. This friendly and informal teacher is an homage to a real man, buried in Uruguay but the character is based on the  traditional figure of the wandering Jew  on which the anti-Semitic discrimination and  the representation of the Diaspora converge
A gipsy camp is another source of old wisdom, which Pelusita visits on her own, listening to the origin of life in the words of  Multani, the old woman who recalls the wandering of her ancestors from Asia Minor to Indian lands. In this sort of bildungsroman one´s roots are constructed exploring the inside and the outside and learning they are everywhere, so one can follow the voices of birds, the stars, the myths in pursuit of the spiritual powers. Leaving one´s birth land and  going away is one unavoidable aspect of personal growth.
7.Liquid word
Liquid word (2006) selects some of her earlier poems from That red apple and Intact heart as well as several non published compositions, all of which demonstrate a self demanding and rational poet, always in control of her emotions.  The title is a symbol of the feminine being, the fluids of the female body and the fluids of earth and sea. In words by Estela Valverde it suggests a woman who goes from the periphery of the cosmos to the center where she is "guardian of traditions and procreation". This sentence is commented by Gloria Salbarrey : the exploration of the cosmic love with which a woman is linked to the vital rhythm  of her own biology. This conceptions are just alluded in some recurrent metaphors -odalisque, sorceress, undergrounded, subterranean being-, and in a number of philosophic, anthropologic or religious poems that have created a very different voice from that of the novelist, the anthropology, the social researcher.
A group of poems deals with the feministic claims of the stereotyped house wife against the repeated nonsense of her task. Very seldom in these youthful poems does Porzecanski express the emotion of the sexual events.
First love affairs depict failures of misunderstanding, fugacity, the searching of herself and the disappointments. In opposition there are the poems about the dearly-loved  Príncipe azul (the Spanish version of the "charming knight"). This part  of the book is addressed to the father about whom she even asks the ironic question about the oedipal attraction. These poems introduce some subjects displayed with Biblical inflection in the eighth part of the book (Small chat with God):   Jewish requirement,  genealogy, birth and death.
In words of Salbarrey the poems allow an intimate reading to listen the verse speaking luxurious words to one´s ear to the transparent,  colloquial and intimate dialogs either with herself or with the sacred or human other. Porzecanski   has left behind the philosophic, psychologic or hermetic theories to construct this thoughtful and austere female voice which sings fugacity, vital cycles, wisdoms symbols and millennium interrogations arising from the depth of her body and ancestral roots.
8. Selected works

B) Chapters in collective books 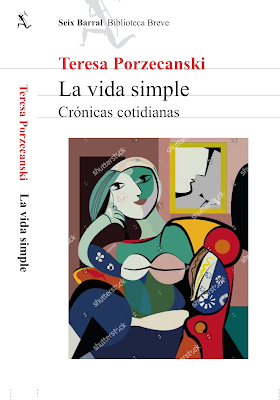